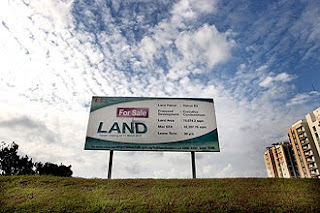 A CHINESE firm new to Singapore's residential development scene has topped the bidding for an executive condominium (EC) site in Yishun.

Beijing-headquartered MCC Land (Singapore), which lost out on last week's tender for an EC site in Sengkang, was the highest bidder for the 15,074 sq m Yishun plot.

Qingdao-based firm Qingjian Realty - which is behind the Natura Loft HDB design, build and sell scheme in Bishan - came in second, with a bid of $118.89 million or $261.71 psf of gross floor area.

Maxdin, part of United Engineers' unit Greatearth Holding, was edged into a close third place with its offer of $117 million or $257.53 psf of gross floor area.

Among the other unsuccessful contenders were Far East Organization, Sim Lian Land and Boon Keng Development.

Most bidders also tendered for the Sengkang site last week.

Many of them are construction companies with the know-how to control and manage building costs, and are well placed to keep development expenses as low as possible, experts noted.

MCC Land is part of listed Metallurgical Corporation of China, one of the world's largest engineering and construction firms.

It has provided engineering and construction services in Singapore, and in 2008 clinched a contract for Universal Studios Singapore at Resorts World Sentosa. Qingjian Realty also began operations here as a contractor.

The Yishun EC plot can yield about 385 units and is near the completed Lilydale EC project. In the resale market of January-February this year, units there were selling at between $510 psf and $540 psf.

Although not within walking distance of an MRT station, the Yishun site is close to Yishun Park, Orchid Country Club and Lower Seletar Reservoir.

CBRE Research said the winning bid will translate into a break-even price of around $520 psf.
At this level, the final selling price of the EC units is likely to be around $600-$650 psf, said Colliers International's executive director of investment sales Ho Eng Joo.

The winning bid, he said, took its cue from last week's Sengkang EC tender, which attracted a higher-than-expected top bid of $315 psf of gross floor area.

Mr Li said the success of the recent launch of The Estuary private condominium in Yishun Avenue 1 had boosted developer confidence in selling EC projects in this location to first-timers. Over 500 units of The Estuary were reportedly sold at a price of $750-$800 psf, he said.

The winners of the Sengkang and Yishun EC tenders have to set aside 95 per cent of units in the initial month of sale for first-time home buyers.

ECs were introduced in 1995 to bridge the gap between public housing and private apartments. Only those with a gross monthly household income of $10,000 or less can apply.