A higher proportion of them are profitable and the gains have shot up, too 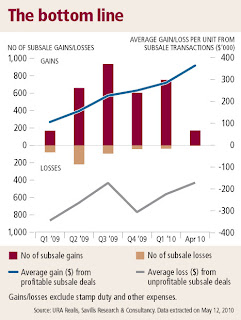 At the low point of the market in the first quarter of 2009, only 67.5 per cent of the subsales of private apartments and condos yielded a profit.

That proportion grew to 95.1 per cent in Q1 this year and 96.1 per cent in April, according to Savills Singapore's analysis of URA Realis caveats data.

It attributes the trend to improving sentiment and prices in the first four months of this year.

Subsales, often used as a proxy of speculative activity, refer to secondary-market transactions in projects that have yet to receive Certificate of Statutory Completion. This can take place three to 12 months after Temporary Occupation Permit (TOP).

Caveat matches that Savills traced up to May 12 this year show that the number of subsales that yielded gains exceeding $1 million shot up from seven transactions in Q4 last year to 32 in January-April 2010. Twentyfive of these lucrative deals this year were for properties in Districts 1 (which covers Marina Bay), 9 and 10 (in Singapore's traditional prime districts).

The highest subsale gain this year, of about $3.3 million, was reaped on a 30th-floor unit at Marina Bay Residences; it had been bought (also in the subsale market) in January 2007 for $4.97 million and divested in April this year for $8.29 million.

The Oceanfront recorded six subsales this year with gains of more than $1 million each. All these units were bought in 2006, before the big push in luxury home prices in 2007. Recent launches in the location - The Residences at W Singapore Sentosa Cove and Seascape - could have encouraged the Oceanfront subsales, said Savills Singapore director of prestige homes and investment Steven Ming.

Oceanfront received TOP in March this year, and it is often around this time that a flurry of subsale activity occurs as projects then have added appeal to buyers seeking properties that they can move into or rent out soon.

Those who bought units on the old deferred payment scheme may also find it opportune to cash out of their investment instead of paying the bulk of the purchase price to the developer at TOP and having to find a bank loan and, possibly, a tenant.

Savills calculated profit or loss as the difference between sale and purchase prices, without factoring in other expenses such as agent fees and stamp duty.

It found 919 subsale caveats for non-landed private homes in Q1 this year, as reflected in URA's Realis system as at May 12. Of these, it found previous caveat records for 86.1 per cent or 791 units. It then compared the latest subsale price with the earlier price. Out of 203 subsale caveats for April, it found earlier caveat matches for 87.7 per cent.

The biggest subsale loss this year was for a unit at Leonie Parc View that sold in February for $5 million, or $1.24 million below the $6.24 million it had previously transacted at in July 2007. The seller had bought his unit from the developer.

The 919 subsale caveats in Q1 this year reflect a pick-up from 749 deals in Q4 2009. Savills' Mr Ming attributes this to spillover from strong buying sentiment in the primary market in Q1.

'We believe new launches, which are usually at higher prices, could also have fuelled subsales in projects launched earlier in the vicinity,' says Mr Ming.

Knight Frank managing director (residential services) Peter Ow predicts subsale volumes are likely to soften over the next six months amid worries about the fallout from Europe's economic woes. At home, there are concerns about an increase in private housing supply from the bumper state land sales scheduled for H2 2010.

The proportion of profitable subsale deals as well as profit margins could ease as prices enter a period of 'stabilisation', Mr Ow says.

Much will also depend on the entry point of these specuvestors. 'If they bought in 2008 or early 2009, it may still be possible to walk away with gains.'