A STATE tender for a 99-year leasehold private housing site next to Potong Pasir MRT Station has fetched a record land price for the area - $607 per square foot per plot ratio (psf ppr).

This is also the second highest price paid for a 99-year condo site sold by the state in Singapore's Rest of Central Region. 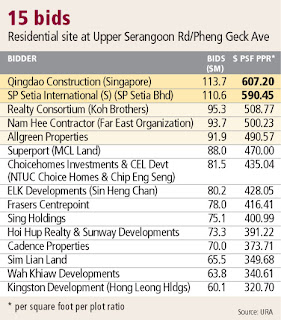 However, analysts point out that save for the top two bids - both of which were from foreign parties (Qingdao Construction of China and SP Setia Bhd of Malaysia) - the offers, from local players, were within expectations.

'As they've no or very little landbank in Singapore, they have to bid more aggressively than local developers to gain a foothold.'

The competition among them, as well as the plot's choice location next to an MRT station close to the city, helped to create a bullish top bid, say industry players.

There was a significant gap between the top two bids, which came in at around $600 psf ppr, and the next three bids (from Koh Brothers, Far East Organization and Allgreen Properties), which congregated around the $500 psf ppr level. The lowest offer, from Hong Leong Group, was $321 psf ppr.

Qingdao Construction director Zuo Haibin acknowledged that his company's bid was 'not cheap', but noted that it had not been able to clinch any sites at state tenders in the past eight months.

Qingdao's breakeven cost is likely to be around $950 psf; it will handle the project's construction as well.

Mr Zuo added that the company is looking at an average selling price of about $1,000-1,050 psf, although the actual pricing will depend on market conditions at the time of launch, which is expected by year-end.

CBRE Research said that units at 8@ Woodleigh and Woodsville 28 nearby were transacted in the subsale market at $865-1,130 psf in January-April this year. Both projects are also 99-year leasehold.

Qingdao's proposed scheme comprises 150-160 apartments, ranging from one to four-bedders. There will be two levels of basement carparking.

This will be Qingdao's third property development here. It is developing Natura Loft, a Design, Build and Sell Scheme project in Bishan, for HDB.

The company also has a 20 per cent stake in a light industrial development in the Kallang Pudding area.

Mr Zuo told BT that Qingdao plans to list its operations here on the Singapore bourse around late-2011 or early-2012. The company is part of QingJian Group in China.

Colliers International said yesterday's top bid was 5 per cent shy of the $639 psf ppr that Wing Tai and Greatearth paid for the Ascentia Sky plot in the Alexandra Road area in December 2007.

That is the record price for condo land sold by the state in Rest of Central Region.

Qingdao Construction's bid is also 40 per cent above the $434 psf ppr that Frasers Centrepoint paid for the Woodsville 28 site in July 2007.

However, that site is farther from the MRT station.