A STRONGER currency has pushed Singapore to the 67th most expensive city to live in, five places higher than its 72nd position last year, according to the latest rankings provided by ECA International.
Among Asian cities, Singapore gained one level to ninth place. This makes Singapore a more pricey place to live in as compared with South Korean's Busan and Ulsan, and Taipei in Taiwan. It is, however, still cheaper than Chinese cities Hong Kong and Shanghai, as well as Japan's Tokyo - which snagged the spot as the world's most expensive place to live in. Singapore's rise in the cost of living rankings come on the back of a strengthened local currency, which 'has been strong relative to other major currencies in the region', said ECA. 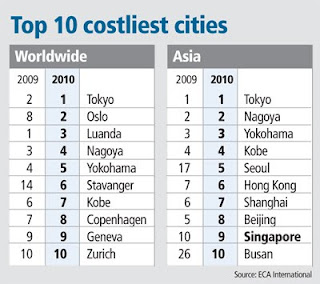 It added that prices of goods and services commonly bought by international assignees have also risen at much faster rates here, as compared with other developed cities regionally.

Said ECA's regional director for Asia, Lee Quane: 'Singapore's rise continues a long-term trend. In recent years, we have witnessed the city's gradual move up our rankings. The cost of living differential between the city state and Hong Kong has become smaller and smaller.

'This is a double-edged sword,' he said.

On the one hand, companies here will now see lower cost of living allowances when they send staff out of Singapore. On the other hand, for companies bringing staff to Singapore, allowances will carry on increasing as Singapore continues to move up the ranking table.

Worldwide, Norway's Oslo came in after Tokyo to rank as the second-most expensive city to live in. Rounding up the top five list are Luanda in Angola - where many regularly used items are expensive due to the country's war-damaged infrastructure - and Japan's Nagoya and Yokohama. In Asia, the Japanese city of Kobe and South Korea's capital city, Seoul, joined Tokyo, Nagoya and Yokohama at the top.

ECA's cost of living study is done based on surveys carried out in March and September every year using a basket of day-to-day goods and services such as meat, fresh fruit, vegetables, clothing and electrical goods. The data for its latest survey was collected in March this year, and was compared with information taken in the same month last year.