THERE'S no lack of Starbucks or Zara here, and certainly not sunshine, but still Singapore has slipped three rungs to 21st in a global ranking of the most liveable cities.

European cities, led by Munich, took the top spots in the latest quality-of-life survey by UK magazine Monocle, which goes beyond hard economic indicators in assessing the attractiveness of a city. 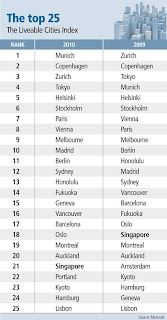 The poll includes 'soft' factors such as hours of sunshine and other attributes of urban appeal, such as the number of cinema screens and yes, the number of Zara and Starbucks outlets in town.

These are 'often-overlooked factors that can bring happiness and ease to everyday life', says the London-based lifestyle and global affairs magazine.

Singapore was rated highly for its low crime rate, ease of setting up a business - which takes about 15 minutes online - and prompt emergency services.

'However, high stress levels, a relatively high cost of living and a sense of self-censorship present room for improvement,' says Monocle.

Germany's Munich beat Zurich, which slipped from first place last year to third this year, while Copenhagen hung on to the second spot.

Munich's connectivity, cultural investment and abundance of green space helped it win top position, says Monocle. This is the second time the German city has been ranked number one since the survey started four years ago.

A growing commitment to embed environmental awareness in every aspect of urban planning was cited by Monocle as a key strength of the top three cities.

Several new metrics were introduced for this year's survey, including the amount of outdoor seating available, accessibility of green spaces, response time for emergency services and ease of starting a business.

The 2010 top 25 list remains largely unchanged from 2009, with only Amsterdam dropping out and Northwestern US city Portland joining the league.

'There was a noticeable lack of reshuffling in 2010, in part because the economy saw many large-scale improvement projects put on hold,' says Tyler Brule, Monocle's editor-in-chief.

'But there were enough shifts, including Geneva, Madrid and Portland, to ensure no mayor should be resting on last year's performance.'

Tokyo, which dropped one spot to fourth position this year, was lauded for its connectivity and easily accessible transport system.