LATEST flash estimates from National University of Singapore show that its overall price index for non-landed private homes rose 2.5 per cent in April over the preceding month.

The flash estimate for April reflects an increase of about 6 per cent since the end of last year and a 32.8 per cent improvement from the low in March last year when Singapore's property market bottomed out after the global financial crisis. 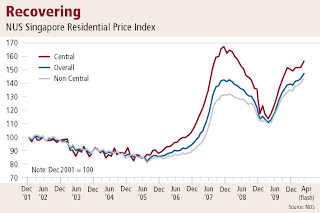 But NUS's Singapore Residential Price Index (SRPI)for May 2010 is expected to rise at a slower pace or even remain stagnant, say market watchers such as DTZ executive director (consulting) Ong Choon Fah.

Sentiment in the property market had already started to wane in the second half of April on the back of concerns about Europe's debt crisis and the fall in the stock market.

The Singapore Government's announcement in May that it will release a record amount of land for sale in the second half of this year is also creating an air of caution among potential home buyers.

'Despite continuing interest among residents to own a private property, one does not feel great urgency to buy. Potential buyers are taking more time to evaluate while they await greater clarity in the big picture. Right now, we're getting a lot of 'noise' due to mixed signals from economic indicators from abroad,' says Mrs Ong.

Agreeing, another property consultant reckons that the NUS indices may begin to taper off for May and show a decline in June, given that these indices cover only completed properties and hence tend to lag the new launches market, where things have already started to slow over the past few weeks.

For April, NUS's price index for non-landed homes in the central region rose at a faster clip over the preceding month than it did for the non-central region.

In the central region, which covers districts 1-4 and 9-11, the index increased 3 per cent, against a 2.1 per cent gain for the non-central region.

However, the year-to-date gain for the non-central region was 6.8 per cent, outpacing a 5 per cent increase in the central region.

The central region index is now 37.8 per cent above the post-financial crisis low in March last year. The appreciation for the non-central region has been at a slower pace of 30.3 per cent over the same period.

Despite the heftier rise in prices in the central region, the flash estimate index for April for the location was still 6.4 per cent shy of the pre-financial crisis peak in November 2007.

In contrast, for the non-central region, the latest index has already surpassed its respective January 2008 pre-crisis peak by 8.7 per cent. As a result, the overall SRPI flash estimate index is now 3 per cent above its November 2007 high.

The central region index is now 37.8 per cent above the post-financial crisis low.