Millionaire households on the rise

Singapore stands out, with such households rising by 35% last year

THE rebound in asset markets last year has buoyed the global wealth market by 11.5 per cent to US$111.5 trillion, with Singapore making its mark yet again as the market with the highest growth in millionaire households. 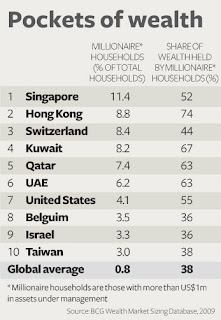 These comprise households with at least US$1 million in assets under management (AUM). BCG's data cover liquid assets and exclude property.

But while asset growth may look robust, there are sobering aspects to the business. Wealth managers' average profitability fell to 22 basis points, from 27 basis points in 2008.

The survey of 114 wealth-management institutions worldwide found that revenues fell despite the fact that assets under management of the firms surveyed increased by an average of 14.3 per cent. Revenue margins - measured by return on assets - slipped by an average 12 basis points to 83 basis points. While managers' costs fell, it was not enough to offset the fall in revenues. Cost-to-income ratio hence rose to 74.4 per cent from 72.3 per cent previously.

BCG says in its report: 'The recovery in AUM masks significant and lasting challenges to the industry's profitability. In most regions, wealth managers face the prospect of persistently low revenues and revenue margins, along with stubbornly high costs.'

It adds: 'Wealth managers must not allow the surge of global wealth to lead to a sense of complacency or a lack of urgency when it comes to addressing (the) challenges. They must focus on quality, precision and service delivery - as well as on truly understanding the client.'

What's more, global assets in 2009 remained in a state of flux. This was driven, says BCG, by a couple of trends: Clients moved assets out of global institutions, spreading them among multiple banks. And, regulatory pressure led to a repatriation of assets from offshore centres to clients' home markets.

The outlook for Asia and the emerging markets, however, remains bright. BCG expects global wealth to grow at an annual clip of nearly 6 per cent from end-2009 to 2014. Asia's growth is expected to be nearly twice the global rate.

BCG partner Tjun Tang, who also co-authored the report, said: 'There is no doubt that wealth will continue to grow faster in emerging markets, fuelled by strong economic growth. We expect Asia-Pacific, including Japan, to grow at nearly twice the global rate, raising its share of global wealth from 15 per cent in 2009 to almost 20 per cent in 2014.'

In Asia and Europe, market values and increased savings played an equal part in the AUM rise. In the United States, market values accounted for 70 per cent of the rise in AUM. While Europe remained the largest wealth region with US$37 trillion in AUM, the largest absolute gain in wealth was seen in North America. Asia registered the greatest percentage gain in wealth of 22 per cent to US$3.1 trillion.

Clients' asset allocation remained fairly conservative in 2009. Globally, allocations to cash rose declined from 51 per cent in 2008 to 48 per cent last year. But the latter is still higher than the 2007 cash allocation of 44 per cent.

Equities' share was 30 per cent. Here lies part of the reason for wealth managers' lower margins as clients still preferred simpler products. This is in addition to the pressure of fewer transactions and tougher price negotiations.

Tongjai Thanachanan, a core member of BCG's South-east Asia asset and wealth management practice, said: 'Investors have started moving assets out of safe havens, but they still have a lot of wealth parked in basic, low-margin products.

'Their asset allocations tend to be more conservative than their actual risk profiles. In addition, the use of discretionary mandates is down, as investors remain wary of signing over control of their wealth.'