$131.7m bid much higher than expected; analysts say release of more sites yet to have major impact

A CHINA-BASED developer has lodged the top bid of $131.7 million - considerably higher than expected - for a 99-year leasehold plot in Sembawang which attracted seven bids in all. 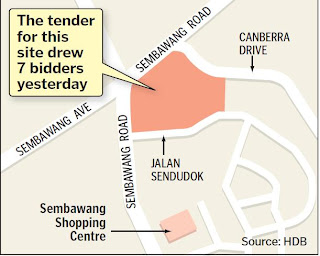 MCC Land (Singapore) said if it is awarded the job, it will build a 300-unit low-rise condominium on the site, at the junction of Sembawang Road and Canberra Drive.

Part of state-owned Metallurgical Corp of China, MCC put in a bid that works out to $387.3 per sq ft per plot ratio (psf ppr).

In a re-run of the government land tender earlier this month, Malaysia's SP Setia International came in second, with a bid of $122.55 million or $360.35 psf ppr.

The Sembawang site has a permissible gross floor area of 340,085 sq ft.

The top bid is on the bullish side and suggests that the ramping up of land supply has not had a major impact on the market, said Colliers International's director for research and advisory Tay Huey Ying.

'We are not seeing exorbitant bids but the results show that developers are still hungry for land,' Ms Tay said.

The Government has said it will make available a record amount of land for sale in the second half of this year.

Ngee Ann Polytechnic real estate lecturer Nicholas Mak said the number of bids was lower than in some recent tenders, but that this could be partly because the site is less attractive than some others.

He expects more subdued bidding for future sites as developers will soon be spoilt for choice. 'Once they have acquired a sizeable piece of land, they are unlikely to be as aggressive in future tenders,' he added.

MCC Land's Mr Tan said the project's break-even cost will be $600-plus psf. Units will sell for $700 to $800 psf when launched in six to nine months. By comparison, units at The Estuary nearby sold in March to April for $660 to $800 psf, and in the resale market, units in a freehold low-rise condo, Northwood, went for $680 to $730 psf from January to April.

This is MCC's second residential site here. In March, it won a tender for an executive condo site in Yishun - its maiden development project here - with a bid of $127.8 million or $281 psf ppr.