All 30 iLiv@Grange units available; Lumos to be relaunched 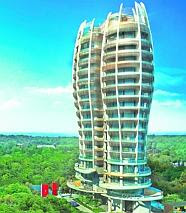 The company also intends to relaunch The Lumos within the next two months. Sales of units in the Leonie Hill project have been put off since early 2008 as Heeton and its partner Koh Brothers waited for the luxury property market to recover.

At iLiv@Grange, all 30 apartments in the exclusive luxury development were made available to buyers from yesterday. But even though no units have been sold as yet, Heeton intends to proceed with construction and sell units as and when there is interest from buyers.

'We bought the site in 2007 and three years have passed,' said Mr Low. 'We are open to selling any unit, but either way, we will start construction, maybe by September.'

Apartments in iLiv@Grange Grange will go for 'above $3,000 per square foot (psf)', but the price could be lower on a psf basis for bigger apartments. Units in other projects in the vicinity are selling for $2,700-$3,500 psf, according to Mr Low.

iLiv@Grange's architecture is the creation of Mercurio Design Lab. The property also boasts interiors designed by yoo, the brainchild of John Hitchcox and Philippe Starck.

'iLiv@Grange was designed with ultimate living in mind, and no detail was spared to achieve this ambition,' said Mr Low. 'By combining the talents of MDL and yoo, we hope to create an architectural masterpiece that is also a celebration of haute couture living.'

iLiv@Grange, which is yoo's inaugural project in Singapore, promises impeccable landscapes and classy interiors. It offers a selection of one, two and three-bedroom apartments, each complete with furnishings such as sanitary wares and fittings from HansGrohe by Starck and Duravit by Starck.

There are also two double-storey penthouses furnished with private roof terraces and pools. The project is scheduled for completion in October 2013.

But while Heeton will sell units in iLiv@Grange, the group's focus will be on selling remaining apartments in the 53-unit The Lumos as the project approaches completion. Just 19 units in the development had been sold as at April 2010.

Units in The Lumos have gone for about $3,200 psf on average, Mr Low said. Heeton and Koh Brothers are now building a new showflat for the project, which will be relaunched in July or August. Pricing has not been decided yet, Mr Low said.

Heeton also has an upcoming development at Killiney Road on the site of the old Mitre Hotel. The company has engaged an international architect for the project and further details will be unveiled at a later date.