MCC LAND, a unit of Chinese state-owned enterprise Metallurgical Corporation of China (MCC Group), has emerged as the top bidder for a residential plot at the corner of Sembawang Road and Canberra Drive.

The company beat six others with its top bid of $131.7 million, or $387 per square foot per plot ratio (psf ppr), the Housing and Development Board said yesterday.

MCC Land managing director Tan Zhiyong told BT that his firm intends to build a condominium with about 300 units on the plot. The break-even price is estimated to be around $600 psf and apartments could eventually sell for $700-$800 psf, Mr Tan added. The project will be launched in the first quarter of next year. 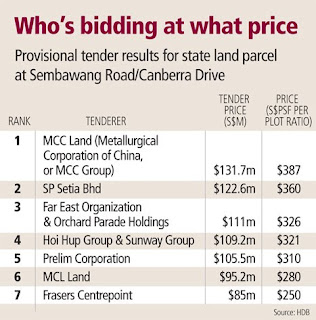 MCC Land's bid is higher than the $280-$310 psf ppr which analysts predicted the 99-year leasehold plot will fetch when it was launched in April. In fact, four of the seven bids came in ahead of the expected range.

'While the top tender bid of $131.7 million, or $387 psf ppr, from MCC Land is not exorbitantly high, it is still on the bullish side considering the potential influx of home supply as a result of the ramp up in the government land sales programme for the second half of 2010,' said Tay Huey Ying, Colliers International's director for research and advisory. The Ministry of National Development in May said that it will offer 27 residential sites - on which a total of 13,905 units can be built - for sale in the second half of this year.

If the site is awarded to MCC Land, it will mark the group's second residential project in Singapore. It won an executive condominium site at Yishun Avenue 11 with a top bid of $127.8 million in a government land tender in March.