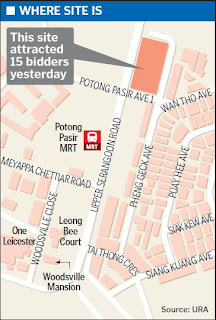 This keen interest came despite a recent announcement by the Government that it would release a record amount of development land in the second half year.

China-based Qingdao Construction (Singapore) put in an aggressive bid of $607.20 per sq ft per plot ratio (psf ppr) or $113.74 million. It came in just above the second highest bid of $590.50 psf ppr or $110.6 million from Malaysia's SP Setia International.

Apart from these two top foreign bids, the rest of the bids were largely within or even below expectations.

Analysts had said that it could fetch $450-$560 psf ppr or $84 million-$105 million. With its proximity to an MRT station, it was expected to be very popular.

It is the second land tender to close after the Government announced a record release of sites for sale in the second half.

The first - an executive condo (EC) plot in Sengkang - attracted a record top bid for EC land last week, though the other bids were within expectations.

Given the ample upcoming residential supply, the response of 15 bids is above market expectations and the quantums of the top few bids are bullish, said CBRE Research executive director Li Hiaw Ho.

'The relatively smaller size of the site, compared to the previous sites offered by the state, is an advantage because it does translate to a lower price quantum.'

Colliers International director for research and advisory Tay Huey Ying said the top bid is the second highest ever received for a non-landed housing plot in a city fringe area. It is just 5 per cent off the $639 psf ppr bid for the Ascentia Sky site in Alexandra Road in late 2007.

Qingdao Construction, experts say, was a lot more aggressive as it had failed to win any sites in a few recent tenders.

Its managing director Zuo Hai Bin told The Straits Times it would have missed out had it made a lower bid. He said it plans to build about 150-160 units, mostly two- to three-bedroom units. The break-even cost is about $950 psf.

'The top two bidders are foreign players eager to gain a foothold in Singapore's growing property market,' said DTZ's head of South-east Asia research, Ms Chua Chor Hoon. Local developers are unlikely to bid as keenly given that the property market has quietened down last month and with the record government land release, she added.

The Upper Serangoon site was on the confirmed list, which means that it was scheduled for tender without developers having to indicate interest first.