As the stock of buildings developed on 99-year leasehold sites sold by the government since the late 1960s gets older, more building owners are expected to apply to the authorities for lease top-ups.

Two such cases are currently under evaluation. But since 2007, the Singapore Land Authority (SLA) has processed 56 applications for lease extensions of which only about 60 per cent were approved. The other 40 per cent were rejected. 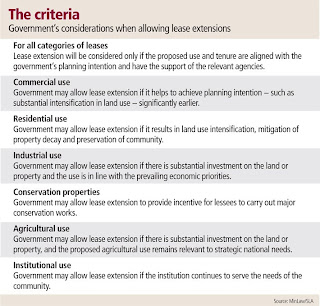 SLA’s spokesperson said in a written response to queries from The Business Times that in land-scarce Singapore, leases are generally allowed to expire without extension. Such a policy makes it possible for the government to recover land upon lease expiry, and reallocate it to meet fast changing socio-economic needs.

‘Nevertheless, lease extensions can be considered on a case-by-case basis,’ she said.

In evaluating requests for lease extensions, the government takes into account several factors including the long-term planning intention for the site and surrounding land, and whether the proposed use would optimise land.

SLA said that lease extensions granted since 2007 involved various uses such as commercial, residential, industrial and conservation properties. The period of the lease top-up depended on specific circumstances, but any top-ups together with the unexpired term of existing leases will not exceed 99 years.

‘This is in line with our current policy that all new state leases (for sites which are capable of independent development) should not exceed 99 years,’ said SLA.

‘To extend or not to extend? The answer lies in whether it fits into the long-term planning for the area. The government does not have to reveal its plans, so it has adopted a case by case approach,’ he says.

He cites the example of the government selling land for recreational use in Marina South on short-term leases of 20 years. ‘The government did not extend the leases when they expired and took the sites back because it had bigger plans for the area,’ Mr Tan said.

‘It’s a similar situation with the government’s plan for a new Central Business District on reclaimed land in the Marina area which can accommodate modern, big floor-plate office developments. What happens to ageing, pencil buildings on small plots in the old CBD? Should the government agree to reset their leases so that they can be redeveloped into new tiny office blocks for which there may not be much demand? The State may prefer to take back the sites when their leases expire and amalgamate them for a bigger development.’

In the meantime, leaving these buildings as they are may introduce urban blight. But if these owners propose to redevelop their buildings into apartments, thus furthering the government’s plan to increase inner-city housing, they may get their lease extensions. The first such case was Natwest Centre, which is currently being developed into The Clift.

Market watchers say building owners who apply for lease top-ups often do have redevelopment proposals, or plans to sell the property on the assumption of redevelopment.

DTZ executive director (consulting) Ong Choon Fah says many leasehold buildings are becoming physically obsolete. Some are also drawing undesirable occupier profiles. ‘If government is willing to top up leases, that will give these property owners an incentive to redevelop,’ she said.

The properties for which lease top-ups have been granted since 2007 are said to include the former Ong Building site, which is being redeveloped into the 76 Shenton project comprising 202 apartments, and the former Overseas Union House site, which is making way for a new 18-storey office project, 50 Collyer Quay.

But not all successful applications have their leases topped up to 99 years.

Lease upgrades approved in connection with CBD office redevelopments have sometimes been for less than 99 years to try and synchronise future lease expiries of all the sites on the same street block. The idea is to have all sites on that stretch revert to the state around the same time to accommodate more comprehensive planning and redevelopment for the area.

Analysts recall the case of 71 Robinson Road, whose lease was topped up in April 2007 not to the usual 99 years but 85 years and 10 months to match the remaining lease term for SIA Building next door. The latter’s lease was reset to 99 years in 1994. Leases for both sites will now expire in 2093.

SLA’s spokesperson said that for commercial uses, lease extensions may be granted if they help to achieve a certain planning intention – such as substantial intensification in land use – significantly earlier.

Analysts say that may explain why a few office building owners in the CBD reportedly had lease top-up applications turned down when they planned only retrofitting works, which are deemed as additions and alterations. On the other hand, those who supported their applications with planning approval from the Urban Redevelopment Authority to redevelop the site into a bigger office block have succeeded at lease top-ups.