THREE out of four potential home-buyers feel that the prices of private homes and resale HDB flats in Singapore are too high, a new survey has found. But this has not put them off; 75 per cent of active property seekers still hope to buy a home within the next two years.

The survey, which was commissioned by property website PropertyGuru, also found that 58 per cent of the more than 2,200 people surveyed feel that the government is not doing enough to keep property prices in Singapore affordable.

Steve Melhuish, chief executive and co-founder of PropertyGuru, said that this was 'surprising' as the survey was conducted in April and May this year - after two sets of cooling measures were already introduced by the government in September 2009 and late February this year.

Overall, the survey showed that investor confidence in the property market remains strong after a bullish 2009. 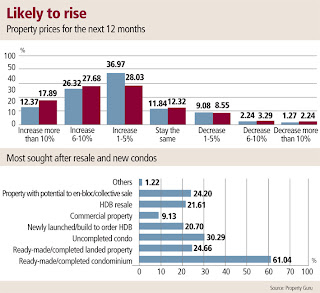 Some 75 per cent of respondents feel that Singapore properties are too expensive. But buying activity will continue in spite of this, if the findings are to be believed.

Answers from a sub-set of 657 active property seekers found that 75 per cent are looking to buy a property in the next 24 months. And 10 per cent plan to buy two or more properties.

'The survey shows that the majority of consumers feel positive about the property market and intend to buy at least one property within the next two years. However, they also think the real estate is too expensive and would prefer the government to take further action to cool prices,' Mr Melhuish said.

He speculated that potential buyers could be looking to pick up properties as they expect prices to climb further in the future. The survey found that prices of private homes and HDB flats are expected to climb over the next 12 months.

Most respondents expect HDB resale prices and private property prices to rise 6-10 per cent over the coming year.

The survey also found that 50 per cent of the 657 respondents who planned to buy a property within the next two years are going to pick it up for investment and to generate rental income. The majority of these type of buyer are at least 35 years old.

But 39 per cent of buyers - a large proportion of whom are in the 25-34 years age group - are buying their first property for their own living.

Another 8 per cent of buyers are purchasing property for their extended family (parents or children). Most of these buyers were also at least 35 years old.

The survey, conducted between April 1 and May 12 this year, was commissioned by PropertyGuru and managed by research agency Pulse group. A total of 2,280 respondents comprising PropertyGuru's users as well as people from Pulse's Singapore database were surveyed.

Mr Melhuish said that his company wants to create a quarterly consumer sentiment survey to better understand property buyers' intentions. The survey will be conducted every quarter.

Source: Business Times, 19 May 2010
Posted by About Singapore Property