Rents seen staying soft because of the substantial supply pipeline

Office rents contracted for a sixth straight quarter in the first three months of this year – but the decline was marginal and rents appear to have stabilised on the back of positive occupier demand and the brighter economic outlook. 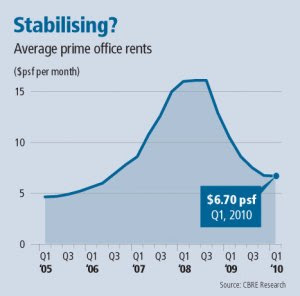 Office occupancies rose in Q1 as demand grew and no new space was completed.

The average island-wide office occupancy rate rose 0.7 of a percentage point from Q4 2009 to 92.4 per cent in Q1, according to DTZ.

Analysts said that tenants who put off making decisions about office leases over the past year are now looking to take advantage of competitive rents.

‘Most of the leasing transactions taking place (in Q1) were for renewals and relocations as tenants took advantage of the low rents to move to better-quality buildings,’ said Cheng Siow Ying, DTZ’s executive director for business space.

‘Expansion, although not widespread, was noted from some financial institutions, IT companies, law firms and other business support companies.’

CBRE’s executive director for office services Moray Armstrong said that ‘flight to quality space’ preserved occupancy and supported rents for prime and well-maintained non-prime offices. But rents for older and less well-maintained buildings may come under pressure as the overall quality of the central business district’s office stock is upgraded with new high-quality developments from 2010 to 2012, he added.

Excess space is also being taken off the market as companies review their space requirements. DTZ Research estimates that shadow space shrank 32 per cent from 387,000 sq ft in Q4 last year to 263,000 sq ft in Q1 this year.

CBRE also said that the conversion and redevelopment of older office blocks to other uses is likely to increase. Rising vacancy and falling rents in obsolete older buildings will encourage owners to sell to developers hungry for development sites. The booming residential market and strong demand for inner-city homes will also drive many existing commercial building owners to redevelop.

CBRE reckons about 1.2 million sq ft of office space will be converted to mainly residential use up to 2013. However, since there is a sizable pipeline of large office developments, there will still be a net addition of 7.1 million sq ft to office stock over this period, it said.

Looking ahead, office rents are expected to remain soft because of the substantial supply pipeline.

‘While there is every sign that rents have stabilised, it may be premature to make a call on an early return to rental growth,’ said Mr Armstrong. ‘The impending supply of large new developments, as well as a substantial amount of secondary supply from tenants relocating to these mega-schemes, may put a brake on rental recovery until 2011.’

DTZ also expects office rents to ease for the rest of the year due to the substantial supply pipeline. It sees them hitting bottom in 2011, or perhaps by the end of next year if the economy grows more strongly than expected.

Rents for better-quality office space are likely to recover sooner due to flight to quality.

However, any recovery is likely to be muted because some 2.5 million sq ft or more a year is expected to be completed over the next three years, DTZ said.