FOR private home hunters looking for some respite in the relentless rise in prices, there was mixed news yesterday.

On the plus side, prices are estimated to have risen 5.1 per cent in the first quarter, moderating a little from the previous quarter's 7.4 per cent sharp rebound. 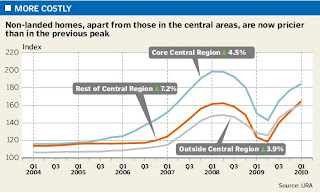 But the flash estimates from the Urban Redevelopment Authority (URA) also confirmed that - other than in the central prime areas - homes are now pricier than during the 2008 peak.

A URA spokesman said private home prices on the city fringes - officially 'the rest of the central region' - are 1.1 per cent above the last peak in 2008's second quarter.

Those in suburban areas or outside the central region areas are a heftier 7.6 per cent higher than levels in that previous peak, he said.

Overall, the URA index is just 1.9 per cent below the 2008 peak - after rising nearly 31 per cent since the third quarter of last year. It is likely to exceed that level as early as the next quarter, property experts predict.

With prices seen to be rising about 4 to 5 per cent each quarter, the index will also easily surpass the all-time peak in 1996 by the end of this year, said PropNex CEO Mohamed Ismail.

Ngee Ann Polytechnic lecturer Nicholas Mak projects a rise of 12 to 22 per cent for private homes this year.

The URA flash data is based on caveats lodged in the quarter's first 10 weeks.

On Tuesday, CBRE issued a report estimating first-quarter sales of new private homes at close to 4,000 units, more than double the number for the fourth quarter.

ECG Property chief executive Eric Cheng said some home hunters are making panic buys as they are afraid of missing out.

In the first quarter, the URA said prices of non-landed private homes rose by 4.5 per cent in the city centre - the 'core central region', down from 7.3 per cent in the previous quarter.

'The property market is still strong, but the 5.1 per cent rise is largely within expectations,' said Cushman & Wakefield managing director Donald Han.

Government cooling measures unveiled in February did not appear to have curtailed demand, though they would have led some developers and sellers to control their prices, he said.

'The index lags the market, so it is actually reflecting what was happening in the fourth quarter. Going by the manner the market has moved so far this year, the second-quarter data will likely be higher,' said Credo Real Estate managing director Karamjit Singh.

But a strong HDB market is underpinning the private market. 'The HDB resale market has been on a one-way trajectory from 2007, totally oblivious to the crisis in 2008, rising 47.5 per cent since then,' said Mr Singh. 'This closes the gap between HDB and mass market homes, making the latter more affordable.'

Said Jones Lang LaSalle's associate director, research and consultancy, Mr Desmond Sim: 'The price increase is still cause for concern. But we are seeing a retraction of the rate of price growth, which shows that recent government measures have had some impact.'

The URA index looks at prices on a per sq ft basis but that does not mean mass market homes are unaffordable, as smaller homes can mean lower total prices. 'If price growth stays below 5 per cent, there may not be a need for more government measures,' said Mr Sim.

Also, more new sites are on the way, pointed out Mr Li. 'As supply begins to catch up with demand, price increases may assume a more moderate level in the second half of the year,' he said.