Prices rise, with a hint of unease

PRICES of private homes as well as public housing resale flats registered smaller quarter-on-quarter increases in the first quarter of this year compared with Q4 last year, government flash estimates show. Market watchers say this could reflect price resistance starting to set in following non-stop increases for several quarters. Behind the rosy picture of brisk developer home sales and price gains, a quiet unease seems to be setting in the market, with uncertainty looming for the second half of this year.

There are concerns about how sustainable the recovery in the housing market is given worries about the US and European economies, among other factors. On the other hand, if the home buyer fever in Singapore does not abate, there are fears of further government measures to cool the property market. Urban Redevelopment Authority’s official price index for private homes appreciated 5.1 per cent in Q1 2010 over the preceding quarter, slower than the 7.4 per cent quarter-on-quarter rise in Q4 last year.

The latest flash estimate also reflects an increase of 24.5 per cent year on year. 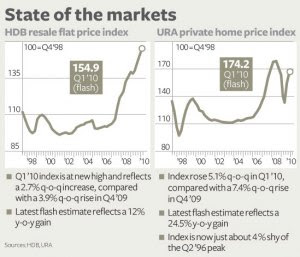 Housing & Development Board’s resale flat price index rose 2.7 per cent Q-on-Q in Q1, a smaller gain compared with the 3.9 per cent Q-on-Q rise in Q4 2009. The latest Q1 flash estimate reflects a 12 per cent year-on- year increase and takes the index to a new high.

HDB also revealed it is launching a total 12,300 Build-To-Order (BTO) flats in the first nine months of this year, and promised to launch more BTO projects in the fourth quarter if demand remains strong. Last year, the board launched 9,000 BTO flats.

HDB offered 3,700 BTO flats in Q1 this year and will release a further 1,200 flats in Punggol in April. From May to September, it will launch another 7,400 BTO flats in a ‘good geographical spread, covering areas such as Sengkang, Jurong West, Yishun, Bukit Panjang and Woodlands’.

HDB reiterated that the BTO supply will be supplemented by flats under the Design, Build and Sell Scheme as well as executive condos (a hybrid of public and private housing) for higher-income buyers.

ERA associate director Eugene Lim said: ‘The number of BTO flats to be launched by HDB this year in a variety of locations is expected to take some steam off the resale market. It simply makes more sense for first-timers to buy direct from HDB as most, if not all, resale transactions involve COV.’ He predicts that resale price increases for the subsequent quarters of 2010 will be marginally less, resulting in the HDB resale price index rising 5 to 8 per cent for the year.

In the private residential segment, developers have achieved brisk sales in Q1 – of about 4,000 units or double the preceding quarter’s numbers, according to CB Richard Ellis’ estimates. 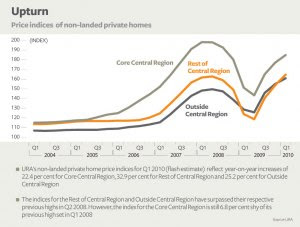 Knight Frank chairman Tan Tiong Cheng explains: ‘Is the global economy out of the woods? Nobody can say. If you’re a developer, and you’re assured of profits if you launch your projects now, it makes sense to sell now.’

Agreeing, Ho Bee Investment’s executive director Ong Chong Hua says: ‘During 2008, it was very tough, prices kept coming down and there was no way for sites bought at higher prices, developers would be able to sell and make a return. Even if they had chopped prices at that point, the sentiment for buying was just not there.’

The price recovery over the past year and resurgence in home buying sentiment have presented an opportunity for developers to roll out projects they had held back, he added.

Knight Frank’s Mr Tan observes that in some instances, developers are choosing to launch projects sooner rather than later to beat their competition. ‘If you know another site or project is coming up in your location, and the captive audience in that location is only X number of buyers, it’s better to try and release your project ahead of the pack.’

However, prices are expected to remain firm. As an industry observer put it: ‘It’s better to maintain prices even if that means taking a longer time to sell than to sell quickly and then rush to replace land at much higher prices, at tomorrow’s prices, on the basis that prices will continue to rise at the same pace as we’ve seen in the past 12 months. The fundamentals are not sustainable.’

CBRE said yesterday that as the government releases more residential sites and supply begins to catch up with demand, price increases for private homes may assume a more moderate level in the second-half this year.